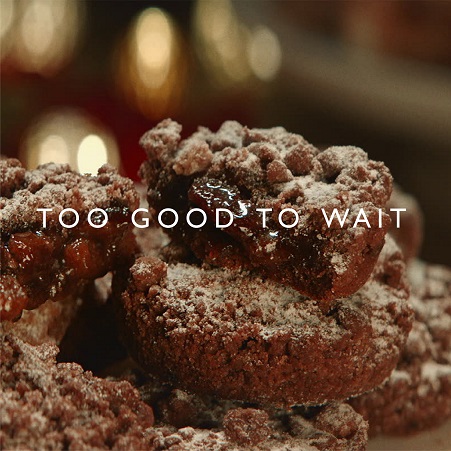 A light-hearted take on the role food plays during the rituals and traditions of Christmas is the focus of this year's advertising campaign from Waitrose & Partners.

Central to the 'Too Good To Wait' campaign is the idea that Christmas is about enjoying great quality food with the people who matter most. But when it's Waitrose & Partners food, you really will do whatever it takes to get to it as quickly as possible.

The retailer will break with tradition this year with a series of six 30 second TV ads rather than just one. Each advert will celebrate the important role food plays in each home at Christmas, and features a familiar festive scenario, in which, families and friends hurry through to get to enjoy their festive fare.

In a first with ITV, to tie in with the idea of 'Too Good To Wait', viewers will see other television ads fast forwarded until we get to the Waitrose & Partners ad during its first airing in the break of the second episode of Coronation Street on ITV on Friday 9th November.

The first advert depicts a Christmas concert where a pianist rushes through a rather speedy rendition of Jingle Bells as quickly as possible after learning that Heston from Waitrose Chocolate and Sour Cherry Crumble Mince Pies would be served afterwards.

Also airing on Friday 9th November is the second advert in the series, 'Mistletoe', where we see a couple lingering under the mistletoe to have a romantic first kiss, until a call from the dining room announces the turkey is ready which prompts the woman to rush to the table, leaving her potential partner standing on his own. We then see what has enticed her – the host is carving a succulent Waitrose & Partners Cranberry Burst Turkey Parcel.

Martin George, Customer Director at Waitrose & Partners, says: 'Looking forward to the traditions and special moments is what makes Christmas the most wonderful time of year, but there's also another aspect that adults and children alike just can't wait for…the food. As much as we all love our festive activities, enjoying delicious food and drink is a priority, and when it's Waitrose & Partners food, you’ll do whatever it takes to get to it as quickly as possible.'

Waitrose & Partners has taken a playful approach to the entire campaign. In the run-up to the first TV advert airing, ITV will be running a number of teasers for the campaign, during which, the continuity announcer will become distracted by some of the retailer's delicious food before remembering to announce the next programme.

The campaign will also be shown in cinemas*, television advert breaks, video on demand platforms/ catch up services, and on social media, as well as additional contextual ads such as those featured on the All4 channel suggesting 'time for a mince pie' when programmes are paused by the viewer.

*In cinemas, the campaign will launch from Friday 16th November to coincide with the premiere of the new Fantastic Beasts film, The Crimes of Grindelwald.

The Waitrose & Partners products featuring in the TV advertising campaign are: